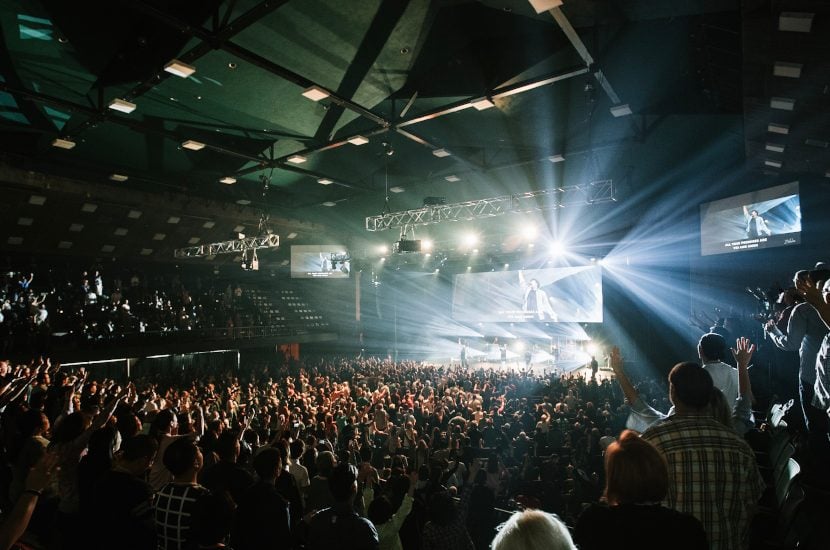 Bethel Media is a full-service production company, dedicated to filming and online streaming of weekly services and major happenings at Bethel Church through Bethel.TV. With over 80 employees, and a growing audience of 300,000 followers in over 195 countries, Bethel Media’s outreach has expanded much further than its original community in Redding, California.

As an organization, Bethel Media evolved from a substantial crew of videographers and supporting staff hired to capture Sunday services and additional outside content. As video content continued to grow and became a substantial part of the ministry, a decision was made to bring resources “in house” to create a dedicated production and post production group focusing on Bethel’s events, weekend services and project-based content.

For many years, as the production team captured weekend services and other events, all media was stored on stand-alone hard drives and various NAS units. At one point, Bethel invested in a premiere storage manufacturer, but found it limited in regard to control and permissions. It also required Fibre Channel connectivity. Jake Watkins, Video Editor at Bethel Media, reached out to Key Code Media San Francisco’s Shane Scarbrough to evaluate options for central storage that could be accessed by different teams over different types of connections, wherever they would be.

Bethel Media has had a long relationship with reseller and integrator Key Code Media, having previously relied on their advice for installation and workflows of production and post production equipment.

As Bethel Media grew, their workflow expanded with it. Bethel uses Adobe Premiere Pro CC for in-house editorial, with a BMD DaVinci Resolve station for finishing. An Avid Pro Tools rigs is also used for most audio post production.

With over 80 employees, ranging from producers, web developers, editors, assistant editors, to finishing editors, Bethel Media need a way to manage permissions and collaborate on assets, as well as archive media in a more efficient manner. For that, Bethel and Key Code Media collaborated on a workflow which included CatDV for the MAM and storageDNA for LTO media archive.

LOOKING TO THE FUTURE: A MORE FLEXIBLE STORAGE AREA NETWORK

While at NAB 2019, Shane Scarbrough, at Key Code Media, walked the Bethel team through the options, ultimately settling on a 256TB Facilis Hub Stack with dual 24EX servers.

“What really impressed me was the flexibility of Facilis – we didn’t need everyone on Fibre and didn’t need everyone connected at 16Gig,” said Darrell Hill, Bethel Media Network Administrator. “With the Facilis system, we could also use ethernet and even have someone on a low-bandwidth Wi-Fi connection browsing media. This gave us much more flexibility for collaboration within the whole company. Now we can have producers on the system as well as our editors with everyone being managed at an appropriate level of connection and privileges.”

With the new system, clients could now connect with a mixture of 8G Fibre Channel, 16G Fibre Channel, and 10G Ethernet connectivity. Bethel Media purposefully bought two raid chassis which can hold up to 32 drives, but they only populated 16 drives in each for a total of 256 TB currently.

“It’s good to know we have room to grow,” said Watkins.

Another feature that impressed the Bethel team was the ability and willingness by Key Code Media and Facilis staff to integrate their older storage into the Facilis Shared File system. Key Code Media’s Sr. Solution Architect Matt Flaum was able to use the Open Storage Attachment feature to connect 3rd Party storage to the Facilis Hub server and reshare that volume out through the Facilis software.

“We didn’t want to trash our older drive arrays as they still had value,” said Hill. “Facilis was able integrate this storage into the Facilis Shared File system and make it accessible to the clients alongside the new storage. This capability really cemented our decision to go with Facilis.”

BUILDING A BULLETPROOF WORKFLOW FOR MULTIFORMAT INGEST AND HIGH-RES DELIVERABLES

Bethel Media shoots a wide range of content at differing resolutions depending on the event. Weekend services are shot on BMD URSA Mini Pro cameras and most of the content is shot at HD using the Apple ProRes 422 or HQ codec. Increasingly, more 4K work is being done, and whenever they shoot a music video, it’s done at 4K using Pro Res XQ.

“We typically have between 12-15 clients connected to the Facilis with both Bethel Media and Bethel Music using different workflows,” said Watkins. “Bethel Music’s creative team, only worked with local hard drives on their video editing systems for a long time, so working in a shared storage network is a new concept for their team which they’re very excited about. Bethel Music recently toured a new album and the creative team captured multiple performances on the road. They love having everything available online to pull from.”

Bethel Media’s focus is all about getting the highest quality content out to the world as quickly as possible, and these tools are an essential part of our weekly workflow.