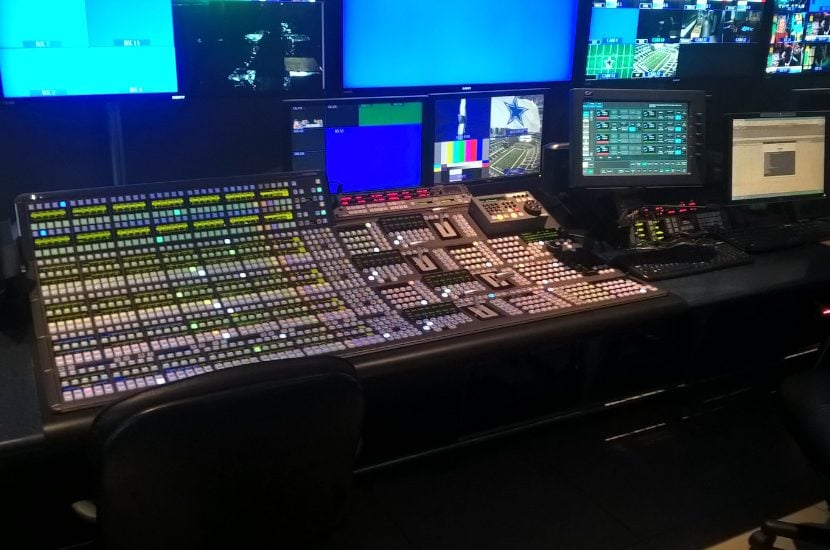 Entering its 11th season, AT&T Stadium, home of the Dallas Cowboys, remains among the nation’s preeminent sporting and entertainment venues.  As expected, technology at the stadium is constantly evolving and the transition of facility video production systems to 4K is ongoing.

Key Code Media recently completed installation of all new production switchers and upgraded camera systems to manage the needs of screens and production systems throughout the facility.

A loaded Grass Valley 5ME X-frame Kayenne handles shows for the massive center hung display cluster and other big screens around the seating bowl and outside on the plazas.  Those shows remain 2K for now, but the Kayenne, after a “full raster” 4K upgrade and a more extensive facility-wide technology revamp before the start of the 2020 season, will serve as the heart of a complete 4K system managed by a 12G-SDI core infrastructure.

For the thousands of newly installed 4K screens in the suites and on the concourses, though, 4K is a reality today.  A Ross Carbonite Ultra, a sleek yet powerful 4K engine, delivers a separate 4K show to these areas.

Eight Grass LDX-86 cameras with new XCU Universe UXF base stations simultaneously output 2K for the Kayenne and 4K via 12G-SDI for the Ross.  aja FS-HDRs and on-board switcher resources smoothly handle 4K format conversion to and from 2K resources.

For the project, Key Code Media provided design, engineering, and installation services, while supplying all of the new gear as well.

Dwin Towell, Director of Broadcast Engineering for the Cowboys, when commenting on his pleasure with the finished product and the quality of the work, referred to Key Code Media as a “rare jewel” of a company. Key Code Media was also the integrator for the original production systems at AT&T Stadium when it opened in 2009, and in 2016 provided the same services for the Star, the Cowboys corporate and training headquarters in Frisco, TX.