With 2021 college football season around the corner, UCLA Athletics wanted to host a live stream event- to highlight new players, coaching, and the upcoming season. The department typically hosts an annual in-person Spring event at the Wasserman Football Center for Alumni and Donors. This year- to keep everyone safe at home- the team decided to live stream the practice- with two hosts, pre-recorded clips, and live interviews from the field.

After a few planning calls between Ken Norris and Mike Cavanagh- a tentative program and live stream workflow were determined. The Key Code Media team would provide the production equipment- video switcher, comm systems, microphones, camera systems, and wireless encoders- as a donation to the school. BC Live Production, a production company, and friends of Key Code Media, was hired to provide staff- production management, camera operators, and technical direction.

Let’s look at the behind-the-scenes elements.

Starting with mezzanine. Two sports television hosts sat on the mezzanine level looking over the practice field. The Mezzanine was located in the building’s shadow, making lighting and diffusion critical for a consistent image throughout the broadcast.

“The Panasonic camcorders provided an excellent quality image and depth of field covering the announcers. While the cameras were different between the Mezzanine and the Field, we used the same scene file to keep a consistent image quality.”
– Dan Dauphin, Solution Architect at Key Code Media

Each host had a headset, which received a program feed at a low volume, as well as communication from the director and production staff. 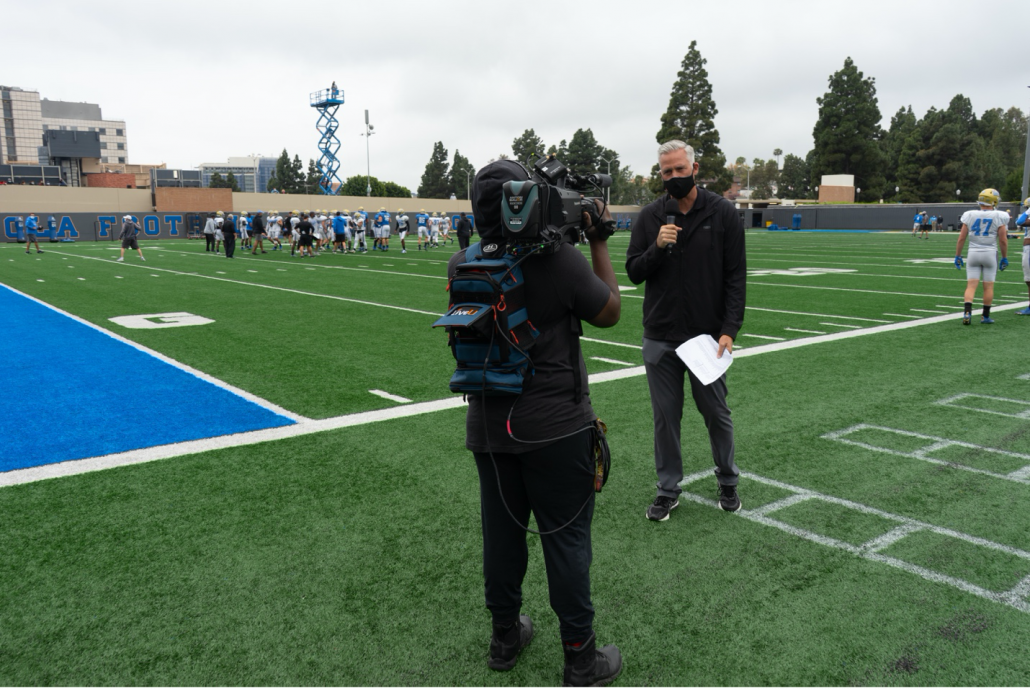 On The Field: In The Action

Throughout the event- one host, and two camera operators covered the action from the practice field. The team was able to be mobile- moving wirelessly around the field, sending video and audio signals over LiveU’s cellular bonding technology.

The two-camera operators had shoulder-mounted Panasonic AJ-CX4000 4K HDR camcorders that were connected to cellular-bonded LiveU LU800 and LiveU LU600 backpacks. LiveU uses cellular bonded networks to transmit a crisp, jitter-free signal to a LiveU 2000 decoder in the control room.

Each camera operator was equipped with RTS comms, so the technical director could advise what shots to take, and prep on-field talent for interviews. RTS wireless antennas were placed on the stage mezzanine, and the football field to extend the intercom communication signal. 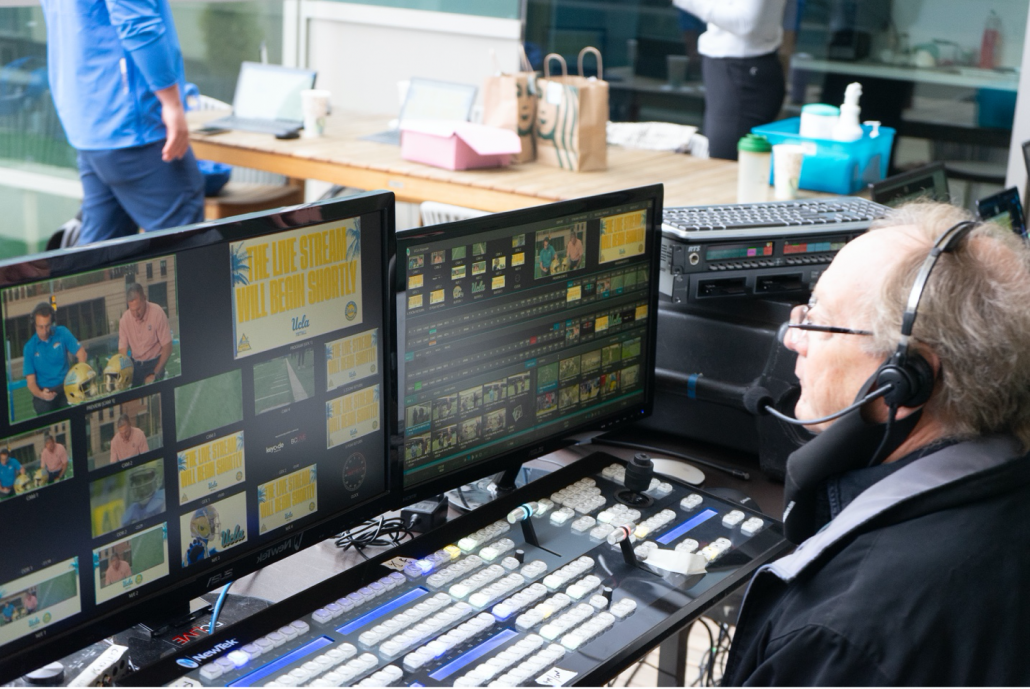 A pop-up control room was built on the third-floor mezzanine of the Wasserman center the day before the show. With its proximity to the mezzanine stage, all cameras, audio, and communication systems were hard-lined into a NewTek TriCaster video switcher, and a Behringer x32 audio console.

In the rack, a LiveU LU2000 receiver decoded both camera and audio fields coming from the field, feeding into the NewTek TriCaster over SDI. The TriCaster was programmed with graphics, lower thirds, pre-recorded interviews, and promotional clips. For delivery, the TriCaster sent a program live stream to a ZOOM call which had Alumni and Donors watching and chatted throughout the stream.

An RTS ODIN digital intercom, with an RTS KP-4016 key panel, connected the 10 channels of intercom used on the production. The ODIN connected to the Behringer x32 using Dante, so all audio channels could be mixed on the console. The technical director was in full communication with talent and crew- while the hosts also received return audio from talent on the field- for back-and-forth dialogue during the broadcast.

The show included Panasonic 4K camcorders covering action on the field, transmitting wirelessly to the control room with LiveU Flypacks & Receiver. Two hosts on an upper mezzanine provided commentary and cue’d pre-recorded clips- communicating with the BC Live director and production team over RTS Intercom Systems. The control room leveraged a NewTek TriCaster for multi-cam switching, graphics, DDR, and NDI Virtual Input to deliver the live stream program over zoom.

Key Code Media provided the equipment & technical workflow for the show. Big thanks to BC Live Productions for providing the crew and support