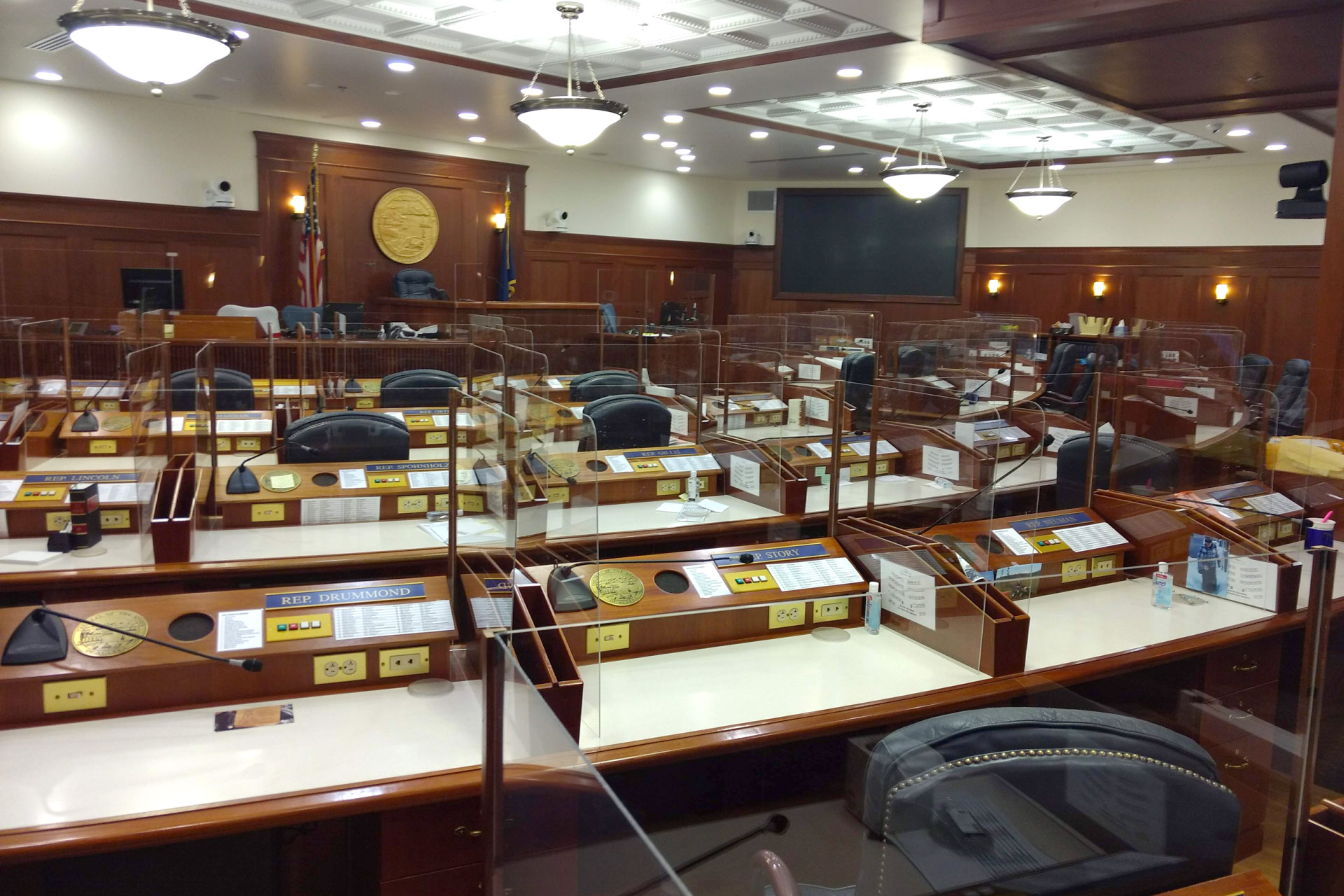 KTOO 360TV is a full-time public TV channel based in Juneau, Alaska, broadcasting coverage of government proceedings from the Alaska State Capitol, located a quarter-mile from the station. Gavel Alaska is one of KTOO’s flagship TV programs with live and recorded coverage of committee meetings, Alaska senate, and house floor sessions, press conferences, and other legislative events. Alaska is a geographically very spread out state, so broadcasting government proceedings to the public is a critical role for KTOO. When legislators solicit testimony on a bill, participants will call in via telephone to participate in the proceedings from remote communities, while watching on television via cable, satellite, and via a network of TV transmitters in almost 200 small communities across the state.

Mikko Wilson is the Production Manager for the station with a long history of working with Key Code Media on sourcing equipment for their station.

“Since 1994 we’ve covered up to 3 events at a time at the capitol, with just one camera operator & the sound person in each. No cuts- single point of view. The camera operator would typically use a pedestal on wheels to roll the camera around the capitol building between meetings. About 12 years ago the State Legislative Affairs Agency (LAA) started doing their own parallel web streams with a ‘security-camera-style’ overhead shot in each meeting space. Suffice to say- we were both long overdue for an improvement to our equipment, and we took the opportunity to pool our resources.” – Mikko Wilson, Production Manager at KTOO

The station is constantly upgrading its facility in phases- and this was the year for Mikko and the team to install new camera systems and HD-ready video production equipment in their four control rooms used to produce Gavel Alaska and distribute it online and on the station’s statewide TV channel. 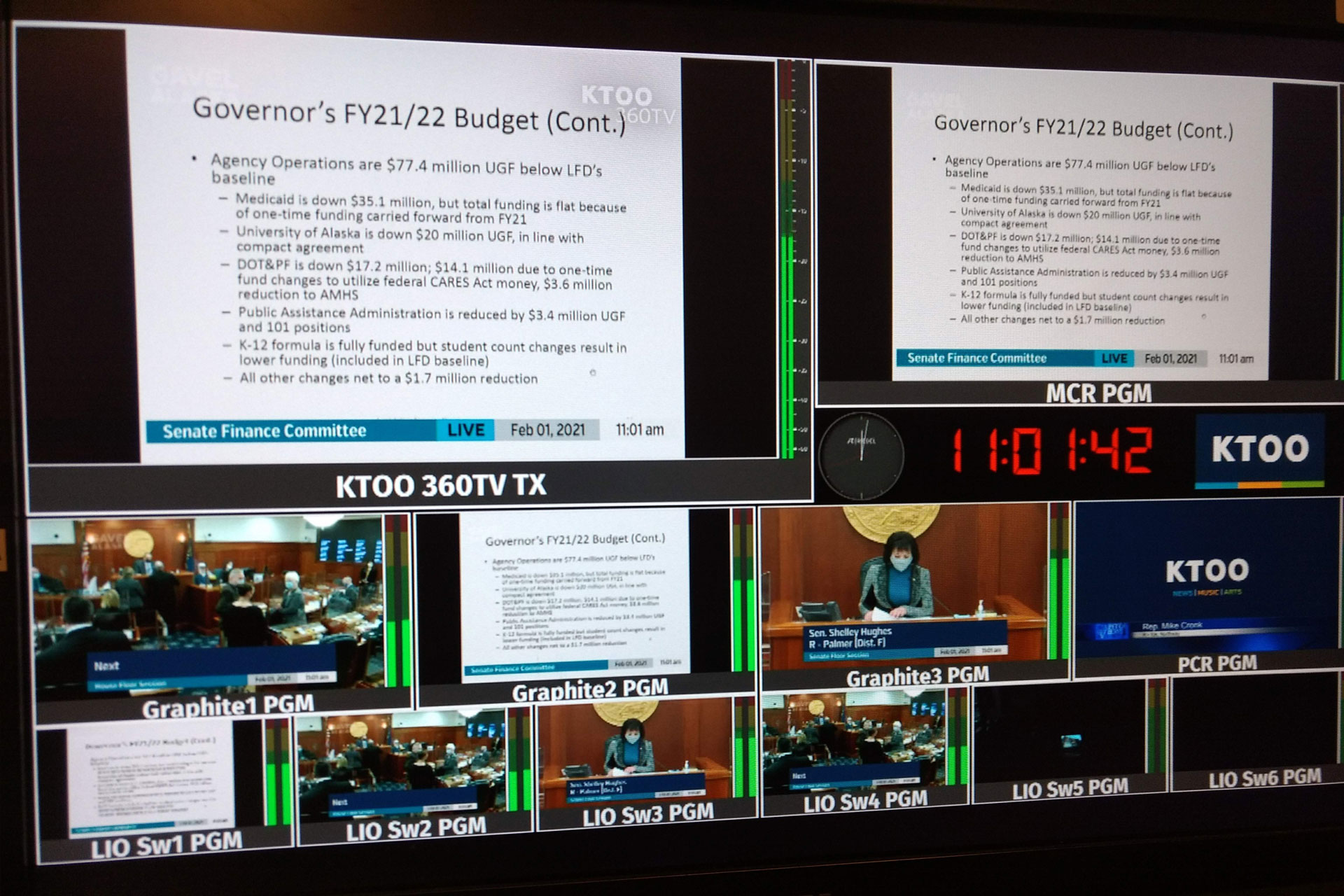 With any government committee meeting- you have three main shots to focus on- the wide shot of the room, the close-up shots of whoever is speaking, and a capture device for any presentation materials, along with clear audio of everything.

KTOO and LAA decided to upgrade from having 3 portable KTOO cameras to cover the entire building, and 2 static LAA cameras in each room, to have a shared pool of 39 Panasonic PTZ cameras, 3 or 4 per room, that could be remotely operated by both KTOO and the LAA from their respective control rooms. KTOO chose a mix of Panasonic AW-UE150, AW-HE130, and AW-UE100 cameras depending on the needs for each camera position. The new cameras are integrated with existing and new Panasonic & Skaarhoj camera control systems in each facility, in addition to other connected venues.

“With the new PTZ cameras in each room. We no longer needed those roaming operators to pack up and move equipment between rooms to capture an event. The installed PTZ cameras allowed our production teams to move the production virtually from room to room instantly, even on the fly- allowing us to cover even more events in the building with less downtime. Instead of rushing from event to event on a busy day, our staff can actually get a real break between meetings. And a happy crew makes for better television.” – Mikko Wilson, Production Manager at KTOO

A Decimator HDMI/SDI capture interface was also connected to the presentation computer in each room to bring any PowerPoint presentation or other media being displayed in the meeting back into the production environment at full resolution, marking another huge upgrade over the old method of pointing the TV camera at the projection screen to try and capture things like state budget spreadsheets for the public to follow along. The interfaces also provide back-feed capability to route feeds from the control rooms, or other meeting rooms, back to the projectors for videoconferencing or overflow viewing of popular events.

All the committee rooms were completely rewired from the ground up- replacing decades-old analog-rated coaxial cables with new Belden 1505A HD coax. While the previous cable runs all had to lead to a central point in the middle of the capitol building, which worked fine for analog and SD- KTOO integration of Riedel MediorNet allowed KTOO to limit cable-runs to the nearest network rack, saving a lot of money in cable runs and installation time. Launching in HD 1080i, the new system is fully 3G SDI ready for the future.

At the heart of all video and audio inputs is the aforementioned Riedel MediorNet signal distribution and processing system connecting six buildings across town, as well as tying into KTOO’s main Utah Scientific UDS/100 SDI router system. The MediorNet system has a total of 15 MediorNet MicroN nodes interconnected with high-speed fiber links, distributed in both the KTOO and Legislature control rooms, as well as the capitol building. In the capitol, MediorNet connects all SDI feeds from each meeting room, while also providing return feeds, and a full 2-way interconnection between the 2 control facilities, in addition to a State museum facility that’s also connected. Together the Riedel MediorNet and Utah Scientific routing systems provide 300 SDI inputs and outputs, with over 4500 channels of audio routing. The inputs at the capitol are grouped together, by room, as presets- allowing the production teams to instantly route the inputs needed for each production with 2 button presses on a Riedel RSP-2318 at each control position. 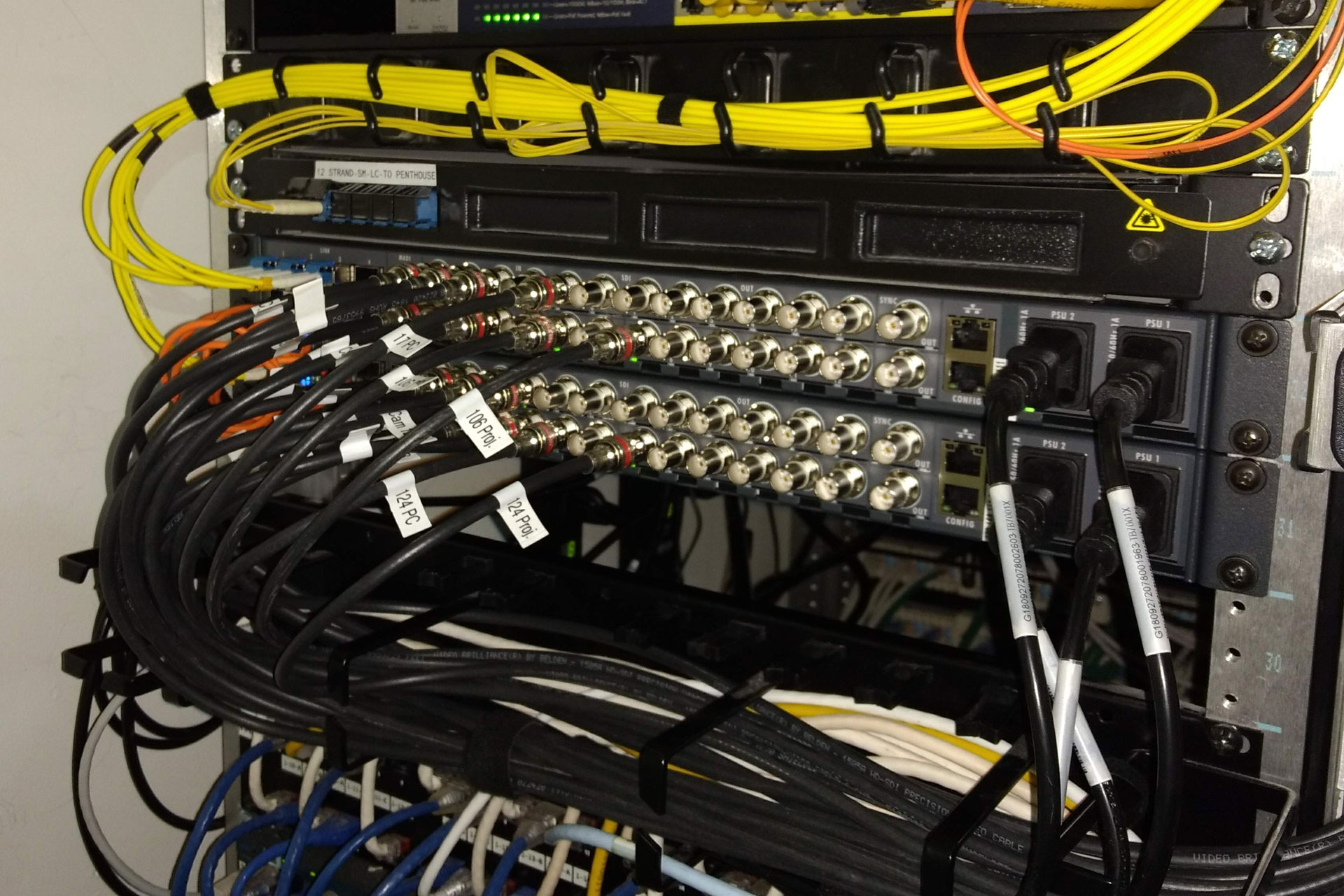 “We used this upgrade as a chance to move all our racked equipment in the control rooms into a single central equipment room across the hallway- giving us more space and reducing the noise for our staff. Of the 12 racks in the CER, a single rack contains five control rooms worth of audio & video processing.” – Mikko Wilson, Production Manager at KTOO

The Master Control manages the live streaming to TVW’s Invintus online video platform, and statewide broadcast with a Harmonic ChannelPort branding & playout system. This was purchased as part of the project to complement KTOO’s existing 8-channel Harmonic Spectrum Media Server under Polaris Play automation & control, which feeds out to a Harmonic Electra X2S broadcast encoder for the television platforms. 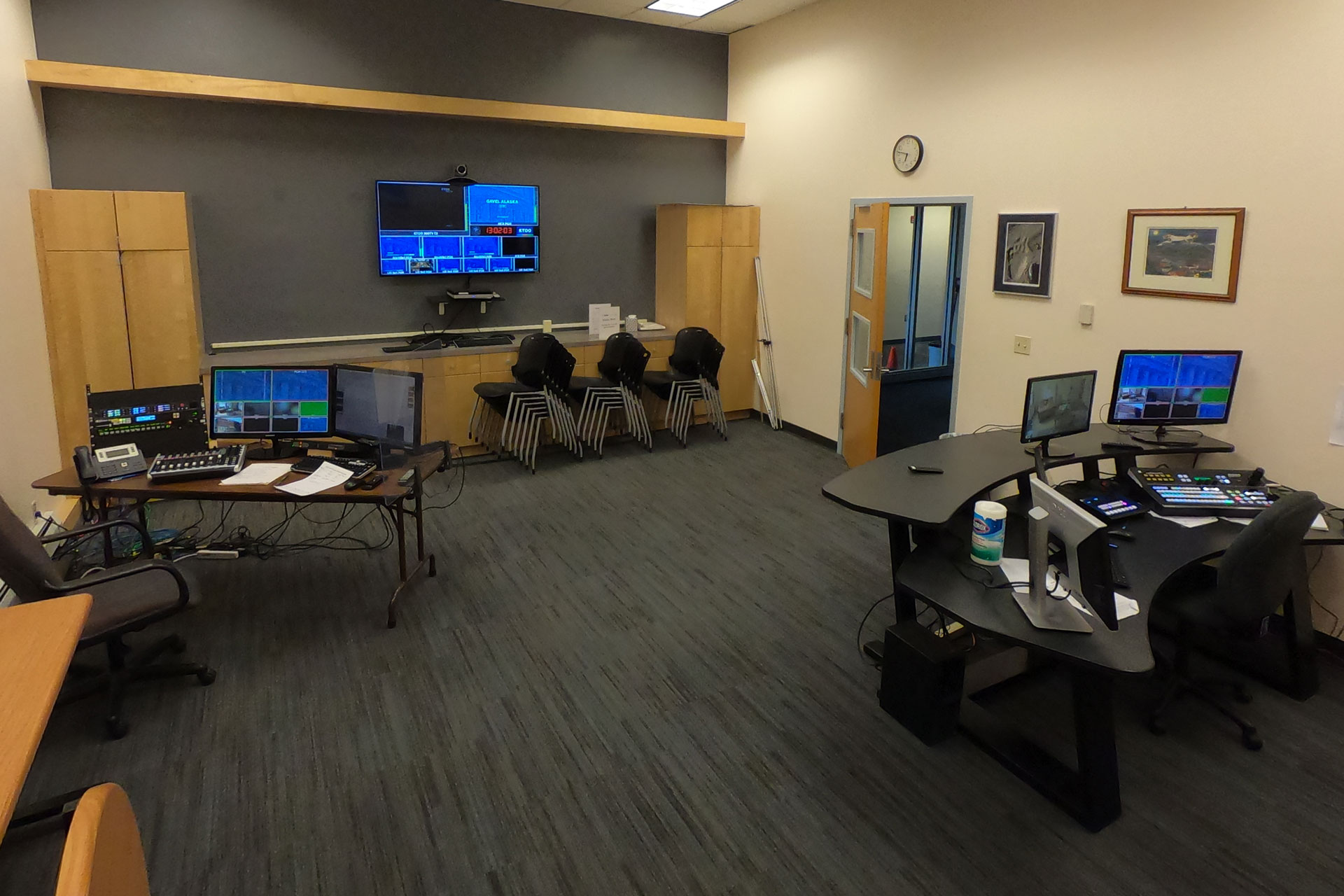 The production, server, automation, and routing systems are all genlock and timecode synchronized to an Evertz 5601MSC master clock & sync pulse generator. Locked to GPS time, the whole system, both at KTOO and in all the venues connected via the synchronous MediorNet, are all timed to function seamlessly as one to the second, the frame, and the pixel. The PTP master clock features of the 5601MSC are also used to synchronize the audio production system of KTOO’s 3 radio stations into the same house timing scheme.

“This was our big upgrade to HD video for master control and legislative coverage. We now have better video quality, sound quality, multiple camera angles, and direct interface presentation capture. It’s a big improvement in quality overall and came at the perfect time. We would not have been able to continue broadcasting at our necessary level of service during COVID without this upgrade. I honestly don’t know how we could have pulled off this production this year in person.” – Mikko Wilson, Production Manager at KTOO 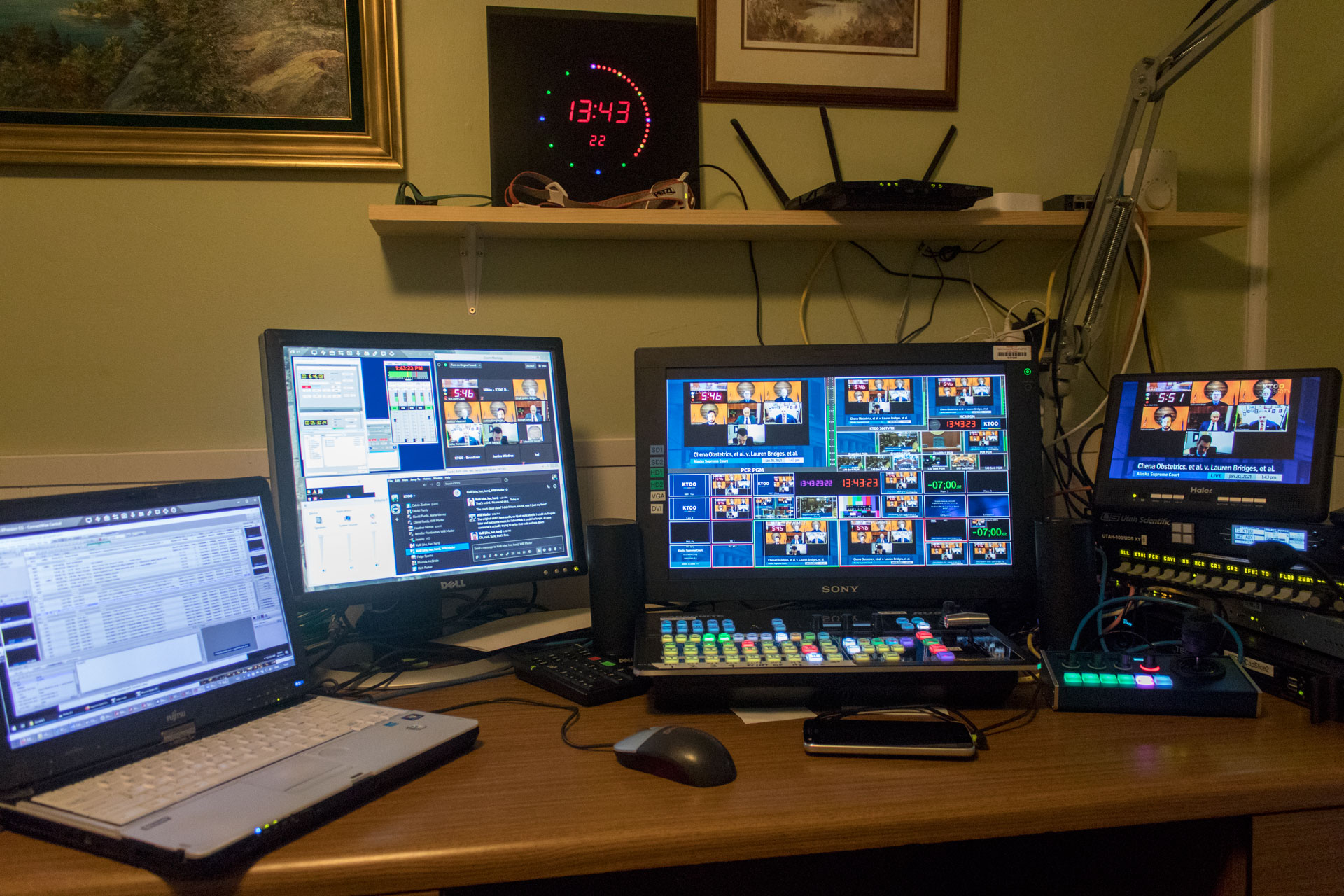 Keeping The Distance With COVID Workflows

When COVID hit, the KTOO team had to comply with social distancing and state standards, while finding a way to ensure they could stay on the air. Equipment from two out of the three new control rooms was spread out into conference rooms and temporarily unused TV Studio space- so staff could meet distancing requirements. The installation of robotic PTZ cameras allows the KTOO team to operate the legislative programming without physically being in the same building as the politicians and their staff, helping keep everyone safer. Matching equipment from the station’s portable “flypack” production kit is helping fill out the distanced workstations both at KTOO and from afar via IP.

“At home, I have our mini Ross Carbonite Black 9 switcher panel, a monitor on a Teradek low-latency video link, a Skaarhoj universal controller for the robocams, a router panel, an intercom panel, and a laptop with Ross’ Dashboard facility control software. I’m able to supervise and operate all the cameras and control rooms remotely without any in-person contact with KTOO’s or legislative staff, who are all still just a button push away. If a crew needs support, or we have an unexpected need to go live -even at off hours, I can be up and running faster than it would take me to drive the 4 blocks to the office.” – Mikko Wilson, Production Manager at KTOO

While the new equipment has helped them operate throughout a pandemic, there are still many challenges ahead. When a large upgrade takes place- normally the whole team would get together and do extensive training. Much of the equipment the team had been using for years- has been replaced. The learning curve can be challenging in normal circumstances- let alone in a pandemic. The team, some of whom live in other states thousands of miles away; uses a mix of a traditional broadcast communication system, along with online collaboration tools like Slack and Zoom, for both training and daily production coordination. A silver lining is that the temporary socially distanced control rooms set up on folding tables let staff spread out and try different workflows and equipment layouts before everything gets bolted down. Once it’s safe, KTOO will consolidate the separated production teams into one integrated suite of control work stations; and eventually, send some staff back into the state capitol to continue to expand the coverage in person.

Key Code Media provided KTOO with new PTZ camera systems, as well as an HD upgrade in four control rooms with video switchers, routers, signal distribution, and processing. Designing a complex equipment upgrade requires having a partner that can respond quickly- answer questions or bring in a manufacturer to answer things within a day. The Key Code Media team, along with the manufacturers they represent, were all extremely responsive and helped the project reach its completion with very few surprises.

“Shipping, freight, and logistics for a project like this in Alaska are not easy, even in normal times. We’re pretty isolated and it requires careful planning to get all the equipment delivered on budget and on time. We’ve been working with the ABS team- now Key Code Media team for many years and have always received excellent service.” – Mikko Wilson, Production Manager at KTOO